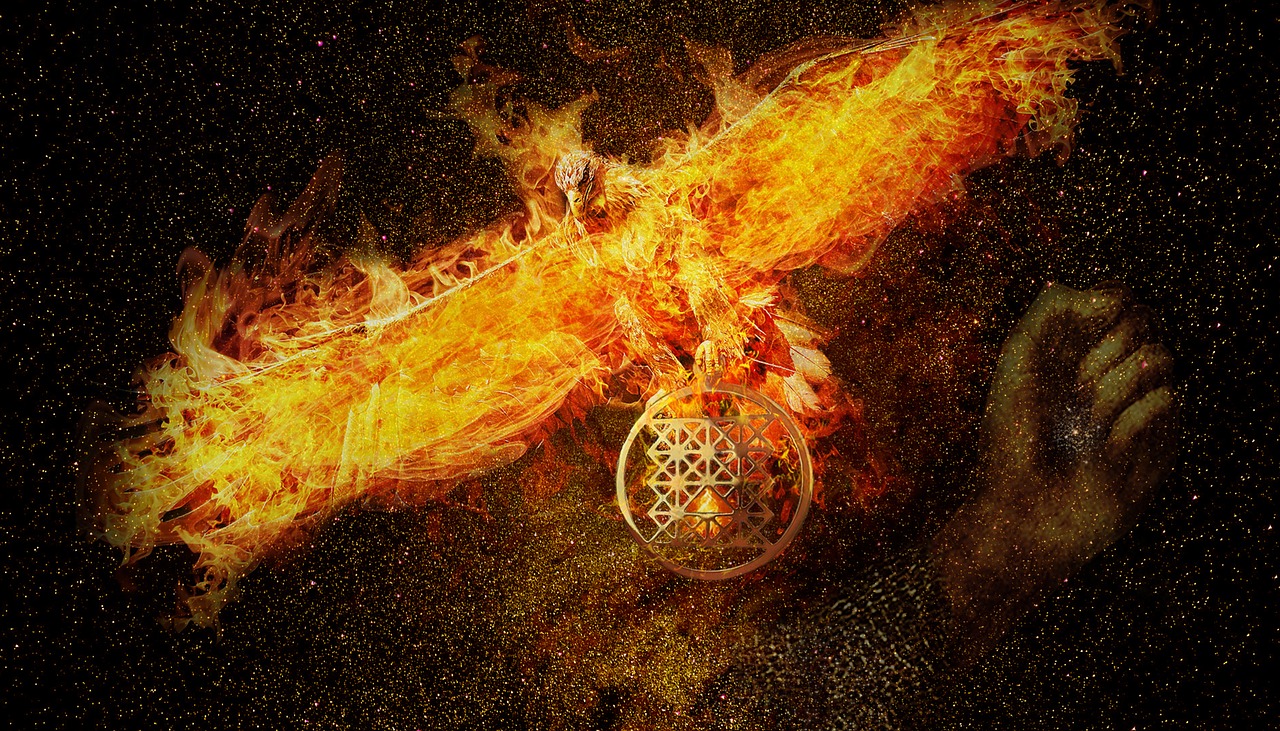 Accordingly to ancient legend, the Phoenix is a mythical immortal bird that engulfs in flames only to be reborn from its ashes.

The Phoenix is a powerful image that connected with immortality, resurrection and life after death, hope, grace and protection. In ancient Egyptian mythology they associate this alternating feminine energy with the SUN god; Ra represented with a human body and the head of a hawk ruled all parts of the created world.

This stored bird has become so iconic in our culture, yet nobody seems to have any idea about it’s true power. Maybe you have seen a Phoenix tattoo on a hipster one day and wondered if these weirdos are onto something you don’t know about. Or perhaps you are one of the lucky few who had a very symbolic dream of the Phoenix and what the real answer behind this iconic image.

So what is the meaning behind the phoenix when it appears in our dreams?

Well it turns out that the meaning of the phoenix in your dream is closely linked to how it is described in mythological & folklore text. But we cannot look at this symbol in a literal sense, but more metaphorically that is mirroring undergoing a major transformation in your life.

If the Phoenix only emerges every 500 – 600 years, it seems to only emerge in your life as a one time event that will lead you towards a rebirth. It’s close connection with FIRE, a symbol that is known to destruct or transform, allows a complete renewal of the Self. Similar element in alchemy the fire is represented by an upward TRIANGLE – the Christian symbol of the resurrection.

To properly understand the true meaning of the Phoenix in your dream, one needs to metaphorically deconstruct the image similar to the way the Bible uses parables. Furthermore, the unconscous has a tendency by sending us messages in Geometric Shapes along with archetypal images pointing you in the right direction. The phoenix in your dream is also commonly known to attach itself to specific colors or animals.

Spiritual Meaning Of The Phoenix

Spiritually speaking the Phoenix is a very powerful bird that represents change and transformation in ones life. It likes to make its appearance during a specific time in one’s life when they are undergoing a spiritual transformation or conscious shift. The phoenix is a unconscious feminine energy comprise mainly of fire rising upwards implies its relation to the awakening of the KUNDALINI –  the term for “a spiritual energy or life force located at the base of the spine”.

Reaching up to intertwined with the masculine energy SUN suggests the process of healing of the Self.  The sun geometrically comprised of CIRCLE (with or without rays), CROSSES, and SPIRALS brings you one step closer to the source. In ancient Chinese mythology, an immortal bird whose rare appearance is said to be connected with the Yin and Yang or foretelling balance and harmony in ones live.

Specific colors of the phoenix in our dreams tend to show up time and time again. But why?

It seems that these colors might in fact be connected to our seven CHAKRAS, in Sanskrit means “wheel” and refers to energy points in your body. The phoenix will rise in your dream by activating or opening these chakras within. For example a blue phoenix in your dream will point towards the throat chakra or the removal of communicate with other people that was once blocked. The green phoenix in your dream governs your heart chakra suggesting you have opened or will undergo a powerful transformation. Click chakra for more information.

Dreaming of a phoenix and a wolf is a very powerful image of the starting phase of this inner transformation. The WOLF is an iconic image of the masculine; tracing back to the origins of the SUN, the wolf has found what it is longing for. The wolf itself belongs to the wild or unconscous part of the dreamer, the phoenix is feminine energy that has is now insynth with this energy.

I had a dream I entered a corridor where there were different types of colored phoenix, some were flying high some we’re flying in circles others perched on the railing some sitting some soaring, there was a long staircase that lead to a door, a red phoenix perched on the bottom of the staircase lead me to the wall on the side of the staircase and sat at the top of these vines that lead to the door so I climbed the vines and once I got to the top I opened the door to find a person looking out… Read more »

The Dreamer
Author
Reply to  Bianca

It wasnt a fluke it was flying in circles. This is quite a symbolic dream that is hinting at some very big transformation taking place within you. See circle in the search bar. Now, if you want to think outside the box this might have to do with your inner energy; root chakra (red) rises up the spine (staircase) that opens a seal. The Bible even talks about the 7 seals once opened. This transforms the dreamer making them complete.

Read articles in the search bar to find out how powerful this dream really is: Chakra, Kundalini and circle.

I have a question, if dreaming of the phoenix is suppose to be a extremly rare one time event in our lives how i had a 2nd dream 6 year later from my first dream about it?

Hello Prossy. It really all depends on what your dream was about and how it coincides with some major shift in your life. Second, you would also want to rule out if the phoenix is something you have seen lately or maybe something you generally like.

So what was your dream about?

The first dream was back in 2015 when i had my near death experience, it first showed itself as a black phoenix, then golden then finally the mix of the 2, i decoded that dream years ago, it was telling me the hate i was holding onto was killing me and i needed to let it go and also telling me to keep a healthy balance in my life and that being 100% light can also be as damaging as hate. After i saved myself i achieved my spiritual awakening. But this second dream that happened a few nights ago… Read more »

I am interested to know what did you see during your NDE? This this dream come before or after the NDE? I have been recently reading the connection between NDE and the body producing a heavy dose of DMT.

The dream is definitely connected to it. I do think the second dream is very symbolic but I need more context to worth with. Have you done any sort of new spiritual practice or meditation?

unfortunately my 2nd dream was only a brief one, i dozed off at my computer without realising then suddenly i was riding on the pheonix’s back, i saw it was blue this time with hints of black and purple within it’s flames then i woke up with a racing heart beat. Naturally i was reminded of the first time i saw it years ago and try to sought the meaning of why it’s blue this time. My NDE on the other hand, i saw so much but unfortunally due to the nature of it it caused me to have short… Read more »

I am not sure. I like to be open minded and think of as many possibilities why this would occur. It’s possible that it might be related to your traumatic event. Dreams have a tendency to pull up things in our past that might store repressed emotions; however with you this might not be the case. This is a symbol that you might know what it means months down the line. “I also noticed my life was flashing before my eye, it was like a projector coming from my eyes playing for me at high speeds on a loop, i… Read more »

Yea i knew it will take time before it’s meaning becomes clear to me, all i got so far is the blue has something to do with the throat chakra Interesting. I am familiar with this as well. It moves very fast that you can barley see the images. I have didn’t know you can slow it down which is quite intriguing. Yep yep, before i always thought it was nonsense brought on by shock, now that i experienced it i know now it’s a natural part of the human body, it felt like projectors coming from my eyes creating… Read more »

This is great thanks so much for taking the time to share your experience. I love the part about the yin and yang. I wouldnt be surprised if it is linked to the throat chakra. Once connected did it look like the DNA symbol? I am sure your life instantly changed. “It was more like i was dragged to it lol. For me it shaped itself to be a computer screen of some type which is transparent and each bit of knowledge came up as a file on the screen and as i hover over them with my gaze the… Read more »

Shai
Reply to  The Dreamer

Hey , can you help me with my dream . I had a dream that I was sitting in the balcony of my house with my cousin and I was watching how large bright rocket was flying out with such strong speed and when it reached the sky it suddenly became a Phoenix with long fiery wings splashing the fire ,it was huge . So I looked at my brother and asked him what’s my answer (I don’t know why I asked it ) he answered you’ll find your answer in the Noah’s oak. And I woke up . I… Read more »

The Dreamer
Author
Reply to  Shai

Shai
Reply to  The Dreamer