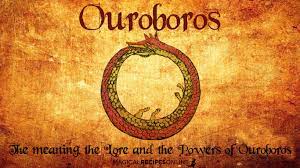 The name Ouroboros or the snake eating it’s own tail  originates from the Greek word meaning “tail devourer,” which dates back to one of the oldest mystical symbols in the world.

A powerful yet enigmatic symbol that contains many different spiritual meanings interwoven into it. Foremost is an image of the snake biting, devouring, or eating its own tail that may also be depicted as a figure eight.

The Symbolic Nature Of The Circle

It’s circular shape represents the true Nature of the Universe and all living things: from beginning to end, death and rebirth, eternal cyclic renewal or a cycle of life.  The serpent must devour it’s own tail to preserve life, in an eternal regeneration or recreation of itself.

Ouroboros Symbolism: What We Know

The meaning ouroboros can be interpreted differently from a Jungian perspective, mythological text, Alchemy, Gnosticism to the Vedas in India; slightly different but all interpretations contain three similar concepts.

The oldest record of the Ouroboros can be dated back as far as 1,600 BCE in the Ancient Egyptian funerary text. Adopted later on by the Greeks this symbol can be traced as far back as the 13th to 14th Centuries BCE in Egypt.

A symbol often used in Gnosticism and Alchemy, the Ouroboros displays the joining of all things, both material and metaphysical; beyond no end, it perpetually changes form in an eternal cycle of death and rebirth.

The image of the ouroboros is commonly seen in dreams or visions; The German organic chemist August Kekulé described his eureka moment when he understood the structure of benzene, after he saw a vision of Ouroboros.

In dreams the Ouroboros emerges in more of an indirect or subtle way, usually unfolds as a snake eating another snake, two headed snake, a snake eating a person; or more direct as the snake eats its tail. The serpent complex nature may unfold threating in the dream when in fact it becomes a symbol of inner transformation.

Metaphorically speaking the snake that eats its tail in a dream represents integration of the psyche, the unification between the conscious and unconscious mind. A symbol that emerges during specific times in ones life. As one sheds their old skin (old self) to make room for the new or to become whole.

Is Ouroboros An Evil Symbol?

In mythology and Christians traditions the snake is known to contain distinctly evil connotations behind it. However, in dreams the snake contains two elements that range from evil to inner transformation.

The Ouroboros is considered a positive symbol that means something that never ends but constantly changes.