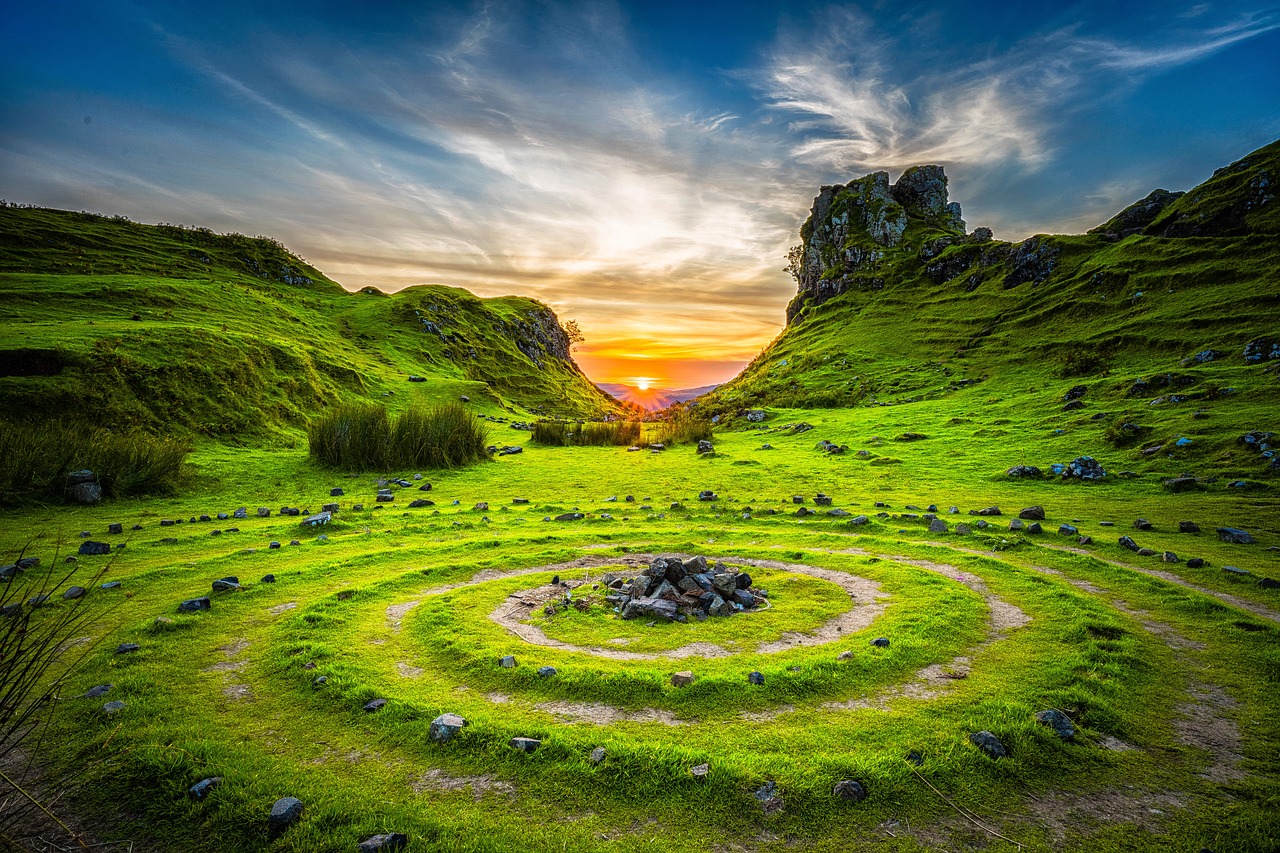 The shape of the circle can be considered one of the most profound universal symbols with an lengthy connotation. A shape that can be seen everywhere in our lives, perhaps one might even like to draw a perfect circle with a pen and an empty piece of paper.

So why is the circle depicted as one of the most enlightening images known to man?

Due to it’s round plane figure whose boundary (the circumference) consists of points equidistant from a fixed point (the center), contains elements of completion, the life cycle, wholeness, The Self, completion, harmony, eternity, and the universe. In a spiritual sense it has a close association with God – mirroring the circle whose centre is everywhere and whose circumference is nowhere; Divine life-force or the Spirit that keeps our reality in motion.

The shape that has no beginning or an end it becomes the force that  guides you towards enlightenment, transformation and a rebirth. Often seen in dreams, visions or can be created spontaneously by drawing.

Article: How Dying In Your Dreams Leads To Inner Transformation

Similar to the sun the circle is a masculine energy; connects to the cycle of time, a number depicted as zero in our solar system of numbering. The circle itself becomes the starting point or the embryo, relating to the end of the process of individuation; turning to the inward self it gravitates towards psychic wholeness and self-realization.

In numerology the number ten is associated with heaven and perfection as well as eternity. Circles hold and contain energy so that cycles of growth can exist within them.

Circles are among the oldest of geometric symbols, and commonly represent unity, wholeness, and infinity. In religion the halo over a saints head implies its completion, where as in Buddhist text the image relating to the circle represents enlightenment and perfection in unity with the primal principles.

In our dreams the circle metaphorically  imprints itself on bike wheels, ouroboros, coins, sun, wall clock, Ferris wheel, balls, or circular foods such as pizza tend to emerge representing completion or The Self. Alternatively, the dreamer may also be the conduit of the circle – known to go around in circles, or walk in circles in the dream. Any sort of disharmony or distortion between the unconscious and the conscious mind will reflect the image of the circle accordingly.

With the occult or supernatural beliefs, by standing in a circle wards off negative energy and protects the person from an attack. Inside the circle allows the person to preserve, to hold inside from outside influences. The circle in your dream hopes you will find completion in what ever symbols emerge along with it.

The Circle: Path To Individuation

In alchemy circles are featured symbolically, they are commonly used for both the processes and the vessels involved. Jung connected alchemy as a symbolic representation of the individuation process – the goal towards self-actualization through a process of integrating the conscious and the unconscious.  A symbol that is identified by a circle, a circle with a dot in the middle, or the depiction of the mandala –  when various aspects of the personality have been integrated.

The biblical meaning of the circle in dreams symbolizes infinity and the sacred union. A circle has been mentioned many times in the Bible as the shape of heaven itself, and as the beginning and ending of time.

Stages of the individuation process

When the dreamer notices a circle rainbow in their dream it becomes a very profound image of enlightenment, higher power, new beginnings and higher consciousness.

In our dream the circle morphs into different colors such as gold, blue, green, yellow, purple that connects to your inner world. Like the rainbow or CHAKRA system each color might represent the area of activation or profound awareness.

If you dream about going around in circles it becomes a negative omen that is pretty much self explanatory. It shows that you might be doing the same thing over and over in your life and expecting different results.

Anytime in our dream if we are standing or sitting in a circle it represents unity within numbers or the people around you. To dream of a ring of FIRE suggests a new transformation; death or destruction of the old and in with the new.