Can your dreams warn you about the future?

The horrible feeling waking up from a vividly disturbing dream usually makes you question if this was a warning dream predicting something bad will happen.

Unsettling dreams have a tendency to resonate all day like a stuck recorded replaying in our mind because of its vivid nature. It leaves us with such an uneasy feeling at the pit of our stomach as we feel something bad might happen. You are not the first person who has wondered your nightmare was a premonition and you wouldn’t be the last.

In this article we will cover all the different theories ranging from a scientific perspective, a metaphysical, as well from a biblical standpoint. Due to dreams enigmatic nature we must cover all the ground work before making your own personal assessment.

Can we really say we have proof that our dreams have the capability to fast forward into the future? Well this debate is not new but has been going on for thousands of years, and yet to this day there isn’t enough substantial evidence.

Though, if you ask random people if they ever had a Dream Warning before you might be shocked to find out something unusual. You might come across some people who will tell you about a dream they had predicting someone death or a pregnancy; while others might tell you that dreams are just a load of crap.

What does science say about warning dreams?

Yet, new research published in the Journal of Neuroscience provides compelling insights into the mechanisms that underlie dreaming and the strong relationship our dreams have with our memories. While other studies coming out of the University of Geneva feels that our nightmares are good for you and contain many benefits such as preparing us for real life danger.

Here at dream dictionary we can sort of vouch for the scientific approach, in fact the majority of peoples dreams in our forum tends to be revolve around past emotional trauma — repressed feelings and unconscious emotions are often regurgitated and spilled out on the floor for the dreamer to see.

This might be why the large majority of people dream of their ex long after they have broken up. I guess these emotions are still live and present in your waking life.

In short, dreams do predict the future, but there is a very fine line that can only be distinguished by a few tell tale signs. The majority of precognitive warning dreams are not like your typical dream, but constructed in a symbolic way that makes it difficult to decode.

The majority of warning dreams are not only forgotten but blatantly overlooked. Very few precognitive dreams are as direct as you think, in fact it is quite rare.

Take for example the dream of boxer Sugar Ray Robinson had when he begged not to fight his opponent Doyle after a nightmare that he killed him in the ring; in his dream he spoke about knocking out Doyle for the win followed by the the crowd yelling, ‘he’s dead, ‘he’s dead‘.

Unfortunately he didn’t listen to his gut feeling and went ahead to fight even with permission from his pastor. Robinson gave Doyle a final blow killing him in the ring. In a way Sugar Ray received a direct message whereas the majority of dreamers don’t.

So if you think that this tragic event will play out the same way your dream did you might be in for a shock. Sometimes your dream uses people, place or things to identify with something that mirrors it.

Death in dreams is a very tricky symbol to decode and the majority of death dreams have nothing to do with death, but rather to symbolize change.

If dreams speak to us in a metaphorical code what better way to say you have changed from your past than death. Even parents who dream of their kids dying often have to do with them changing from highschool to college, going through puberty (no longer a child) or if they just becomes a different person for better or worse.

When we dream of ourselves dying might have to do with an ego death or old ways, beliefs, or habits that no longer serve you. Now any sort of resistance of this change in our waking lives tends to make us dying more graphic and disturbing — you will be forced to change whether you like it or not. Cough cough! Break ups!

Article: Benefits of dying in our dreams

How to spot warning signs in a dream

On the impression your dream is a warning dream here are some of the warning signs.

The truth about warning dreams

Can your dreams be trying to tell you something? Analyzing the meaning of our dreams in today’s world is considered a pseudoscience that is up there with crystal balls, newspaper astrology and psychic hotlines.

Though, if you think dreams are B.S I encourage anybody to scan the comment section of Receiving Gifts From The Dead and you might notice when the dead enter our dream realm they often bring us peculiar gifts. Why? That might be because the unconscious speaks to us using geometric code and metaphoric symbols.

No matter the background, religion, or culture the dead symbolically gifts us the same items. Why? Perhaps this is the coded symbolic language mentioned above – a scripted code that is similar to the parables mentioned in the Bible. A language everybody can understand….

Dreams warning you of danger

It is not uncommon that your unconscious will hint at possible danger that could be avoided in your life.  Maybe if you have ignored your gut feelings about someone or something that might be bad for you, than it is quite possible you will be warned in your dream.

One of the most common symbols of a deceitful enemy is known to manifest as a snake biting us in our dream. Unconsciously you may pick up on this person being cold blooded predator who is only out for their own gain.

You might think that the hooded masked man in your dreams means you will be stalked but this is farthest from the truth. Deceitful or untrustworthy people tend to take the shape of animals or reptiles biting or attacking us; but than again this is not the case for everybody.

Depending the context and location of your dream you will be able to determine if this is an actual threat or belonging to you, or your own unconscious primitive behaviours. 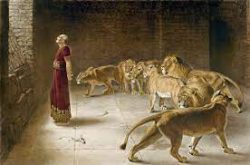 Can God send messages through dreams?

Numbers 12:6: And he said, “Hear my words: If there is a prophet among you, I the Lord make myself known to him in a vision; I speak with him in a dream.

Can god really talk to us in dreams? According to the Bible this is possible. Some might call it a message from the unconscious, spirit world or a direct message from god.

In the Bible dreams were mentioned as divine messages from God. Daniel was well known for his prophetic dreams and visions God gave him in the Book of Daniel. Daniel interprets the king’s dream which foretells four kingdoms, which are ultimately destroyed by a great rock.

Prophetic dreams are thought to be dreams that have foretold a future event. Sometimes these dreams are so powerfully symbolic that they drain the parsons energy upon waking.

Prophetic dreams may foretell both inner and outer worldly events. Prophetic warnings similar to Pharaoh’s dreams in Genesis 41 warning him to store up food to prepare for a coming famine. While other dreams tend to relate to negative aspects of the dreamer that is harming them in their lives.

I dreamed I entered a 5 story house with 4 other people and we were searching for something. As we climbed the stairs, Each room became more cluttered! As we were reaching the top of the stairs and entering the last level, the owner came home, we had to get out of the house by climbing out a window and jumping onto a roof nearby and then climb down the side of the building to safety below.

what the heck does this mean?

Houses in dreams often connect the person to the psyche/mind or inner architecture. You are searching for something that might be unconscious to you. Inside your mind the stairs become symbols of advancement (see climbing in search bar). But if the room is cluttered it points to your mental state of mind, something that needs cleaning out. Buildings in our dream are symbolic in the sense they appear to be related to things we metaphorically build in our lives; a sub construct (mind/psyche) relating to principles, relationships, beliefs (see building dreams in the search bar).

It’ sort of like a metaphorical joining that is unconscious to you. We recently did an article about why we dream of our exs because it happens more than you think. In fact it has more to do with you trying to resolve the past or the old part of you as opposed to them. So your dream is hinting at this and wants you to find some inner peace so you can fully move on. Read the article in the search bar: Ex Banks hold value to things stored away within you. Now depending on your relationship with him… Read more »

what does it mean when you dream your fiancé shoots you in the back, and when you turn around, you are in a white wedding dress?

It would be hard to say really without much context to the dream. The wedding dress would be connected to the wedding, however the gun and the location indicated anger directed; location being behind ones back.