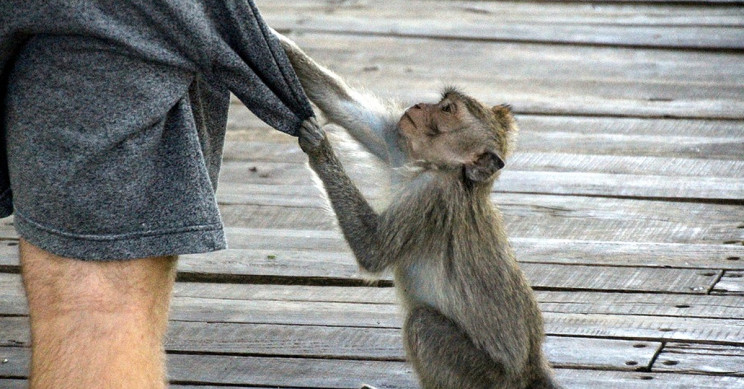 In the Buddhist doctrine, the “monkey mind” is a phrase used that compares the mind being in a state of restless, disorganized and unbalanced.

Dreaming of the monkey is not to far removed from the Buddhist standpoint as it represents our inner critic that is hard to control. Monkeys may appear in our dream to show us own immature behaviors, instincts, deceit, betrayal, playfulness, and childlike behavior.

Monkeys are also connect us with our family, bonding and nurturing aspects that should be cherished. Not to be confused with the CHIMPANZEE or GORILLA, the monkey in our dreams connect us to a different part of our brain.

The symbol of the monkey often reflects the unconscious traits of the dreamer that point to being curious, mischievous and playful around others. Sometimes when these traits are out of control the monkey might turn on us in the dream. Once we understand the nature of the monkey then we can apply it’s behaviour with ours.

Monkeys similar to the FOX, CROW and Rabbit they are known as archetypical the tricksters. The Trickster, Jung says, is an aspect of the shadow archetype, at least in its negative traits that the dreamer may be unconscious off. We tend to think of these traits as being a modern day troll or someone who stands back after stirring up trouble between two people.

Remember monkeys in dreams are known to reflect a degree of intellect or secret knowledge and uses it to play tricks or known disobey normal rules and defy conventional behavior. The trickster deity breaks the rules of the gods or nature, frequently malicious but usually with ultimately positive effects.  Monkeys cross the boundaries between wisdom and immaturity, they understand when it’s time to play and be serious.

Dreaming of being attacked by a monkey in your dreams points to aggressiveness and temperamental behaviour.  This could be from someone you know or possible traits that you possess that are not understood. If a monkey bites us it reflects our own childish behaviour – or – that of others that can affect you.

When you dream of a monkey on your back suggests a metaphor to have a terrible burden that one can not get rid of. You will grapple with a problem that will not go away. Noticing a family of monkeys hints at a need to bond and spend time with your family.

When you hear monkeys communicating it might suggest idle chatter. Imitation and immaturity might be at the forefront of this dream. A monkey that plays wants you to lighten up and start exploring the wild part of you.  It might be an indication to mediate to control these pestering thoughts around your head.

Noticing a monkey in a cage might not be such a bad dream, in fact may represent having your negative thought patterns and behaviors under control. It could be considered the monkey mind captive and will no longer cause destruction.

Baby monkeys in dreams represent minor annoyances that need to be kept an eye on as you don’t want it to get older. Once a monkey is not trained at a young age it may be hard to control in the future. Noticing a white monkey in your dream connects the dreamer to innocence and purity.

Biblical Meaning Of The Monkey

In the bible the monkey is a reflection of base instincts such as lust, greed and malice, and can even represent the DEVIL.

Monkey lore in India dates from before 500 BC.1.  One of the most popular Hindu gods is Hanuman has the face of a monkey symbolic for the always agitated to the human mind. He is revered for his bravery, strength, loyalty, devotion, and dedication to justice.

In one of China’s great four novels a Sun Wukong or monkey king, is a monkey born from a stone who acquires supernatural powers through Taoist practices. He  rebelled against heaven and being imprisoned under a mountain by the Buddha. He had the ability to see through the disguises of demons, even the ones who can fool supposedly wiser persons (his master).

In American Indian folklore the monkey plays the role in cleverness and trickery. They view the monkey as a omen of misbehavior that often leads to problems and future issues.

The Egyptian God Thoth appears as a dog-faced baboon or a man with the head of a baboon when he is A’an, the god of equilibrium.  He is known for the author of all works of science, religion, philosophy, and magic.

How To Control The Monkey Mind

1. Focus on breathing
2. Mediate everyday
3. Practice yoga, Qi Gong, Tai chi
4. Come to terms with your past
5. Live in the moment
6. Watch your thoughts