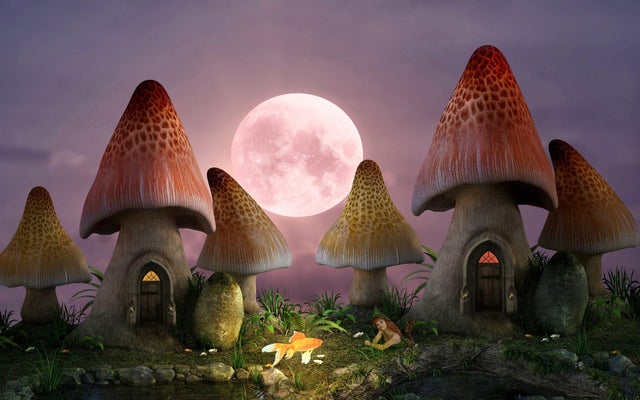 Are You Dreaming Of Mushrooms?

There seems to be a fine line between a nourishing, psychedelic or poisonous mushroom when they randomly show up in your dream.

These powerful symbols emerge during specific stages in your life when a transition is taking place. You might think these random spores just appeared out of thin air, but this is furthest from the truth. Symbolically speaking these powerful images connect with the womb or a deep underground cave.

Why Cave Are Powerful Dream Omens

Metaphorically speaking the mushroom dreams contains all the elements of undergoing some sort of unconscious transformation. Why? Mushrooms are mysterious (ancient) fungi that seem to grow in the dark corners of our mind (unconsciousness). Often connected with the psychic realm or magic powers, the mushroom exists abundantly but is outside our conscious awareness. Known to spread or catch on to something thus representing undergoing rapid growth.

Oddly enough when mushrooms emerge in our dreams they are usually attached to parts of the human body such as the head, arms, legs; often being pulled out from the skin. The vivid or uncomfortable emotions expressed becomes a mirror of inner chaos before undergoing a rebirth in ones life.

Remember the mushroom that is attached to the body it contains something that has the ability to develop and spread within; a poisonous or edible image guides you to a positive or negative omen. For example: If one dreams of a mushroom growing on the head it would connect with thoughts or mind; whereas the skin shows what you display to others.

In most cases mushrooms are very positive dream omens that imply change or growth in your life. The bigger the change in your life might be displayed by a giant mushroom in your dream. Furthermore dreams about harvesting, picking, soup, uprooting, white or growing on the body shows an unconscious awakening process taking place.

It’s fragile yet strange nature is telling you something is emerging in your life, however this might be something you are conscious of yet. Usually when the dreamer is picking or uprooting mushrooms in their dream becomes a symbol of the early stages of advancement.

Did you know that Fungi are in a kingdom of their own but are closer to humans than plants? Maybe the mushroom in your dream is just letting you know about something powerful within that can transform if you allow it. To dream of a big mushroom represents a major shift or awareness that you will undergo.

Biblically speaking the mushroom is seen as the god of the Bible, and that the mushroom is Jesus. Many theories suggest that Jesus was in fact a mushroom — once ingested you will have a spiritual awakening. Mushrooms in spirituality often represent gods, so it makes sense that mushrooms in the bible would represent God or Jesus.

it was a big psychedelic mushroom and when i bit into it it had a pink substance inside, the oter part of my dream im walking into a froest of mushrooms and theyre all touc

Best interpretation on the subject of mushrooms that I have read! Thanks for the helpful insight!!