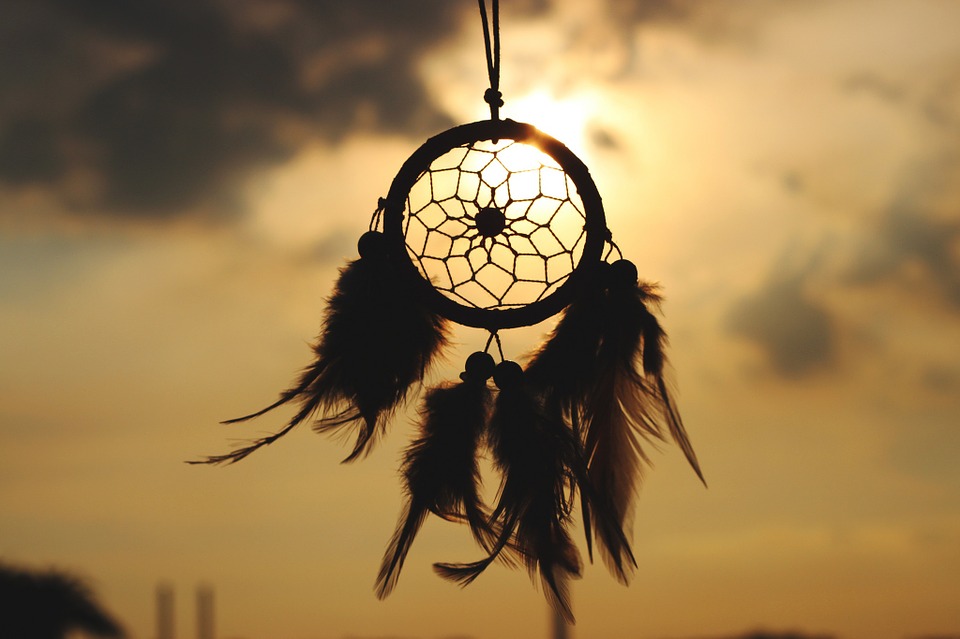 What are Dream Catchers?

Dream catchers are one of the common interesting traditions used by the Native American people across North America. You may have see them hanging on car rear view mirrors, over the beds of Native peoples homes and even worn as tattoos. Though the traditional dream catchers are intended to ward off any negative dreams therefore allowing positive dreams to enter the dreamer.

The design of the dream catcher has a center with feathers hanging down for the positive energy and good dreams to enter the dreamers mind. Native tribes such as the Ojibwe refer to the dream catcher as the Bawaajige Nagwaangan meaning “spider” as it catches the bad/evil dreams like a web.  In the morning the sun will remove any negative energy that was trapped and stored in the web.

Native Americans believe that the night air is filled with dreams both good and bad. They will position the dream catcher over the top part of the bed moving freely in the night air. All the positive energy and good dreams will flow naturally through the dream catcher, moving through the outer holes and slide down the soft feathers. This happens so gently that many times the sleeper does not know that he/she is dreaming.

The Ojibwa tribe grandparents made smaller dream catchers to hang on the cradle boards of their grand children. Each time the feathers moved while a child was sleeping, they believed a good dream drifted down onto the child.

1:  The Dream catcher originated with the Chppewa (Objiwe) Tribe and was based on the legends, myths and creation story of the people.

2: The Ojibwa people  would tie strands of sinew string around a frame of bent wood that was in a small round or tear drop shape. The patterns of the dream catcher would be similar to how these Native Americans tied the webbing for their snowshoes.

3:  The Chippewa (Ojibwe) people base the dreamcatcher on an ancient myth surrounding ‘Asibikaashi’, the Spider Woman who took care of the children and the people of the tribe.

4: Mothers and grandmothers would imitate Spider woman and her magical webs and weave webs for the children, using willow hoops and sinew, or cordage made from plants. Traditionally dream catchers were no wider than the width of the makers hand.

5: The dream catcher was hung by a sleeping child as a protective charm to prevent nightmares, night terrors and other bad dreams.

6:  Dreamcatchers were later adopted by other tribes who, with the introduction of the horse, migrated to the Great Plains to hunt buffalo. The Plains tribes adopted the new lifestyle and mixed with other nations through trade and adopting not only ideas regarding clothing but also some of the different cultures including the dreamcatcher.

7: The Sioux tribe based their Dreamcatchers on the legend surrounding Iktomi a teacher of great wisdom who was also a great trickster and appeared in the form of a spider. Iktomi gave a dreamcatcher to a tribal elder telling him it that whilst he was sleeping the web would catch good ideas and dreams and the nightmares and bad ideas would fall through the hole. When a person woke the good ideas and dreams would be remembered.

If the dream catcher purpose is to ward off our bad dreams than only bring us good dreams, than what is the point about figuring out our dreams than?

As much as I hate my bad dreams and nightmares there is a message from it via unconscious that needs to be decoded. If we are overlooking our idiocracies in our daily life than what better way than a scary dream to give us a wake up call.

Even the Naskapi tribe that lives out eastern Canada pay very close attention to their dreams to find their meaning, and test their truth can enter into a deeper connection with the Great Man. I see a bit of a contradiction there so I prefer to sleep without one for now.

Now a days this symbol is used far too often as a tattoo on peoples arms or back without given much thought into it.  Trying to be different ends up them looking like sheep when you ask them the meaning. My guess is that it will be just like the all seeing eye and tribal tattoos, redundant.  I hope we don’t loose the real meaning of of what the true beauty of what it means.