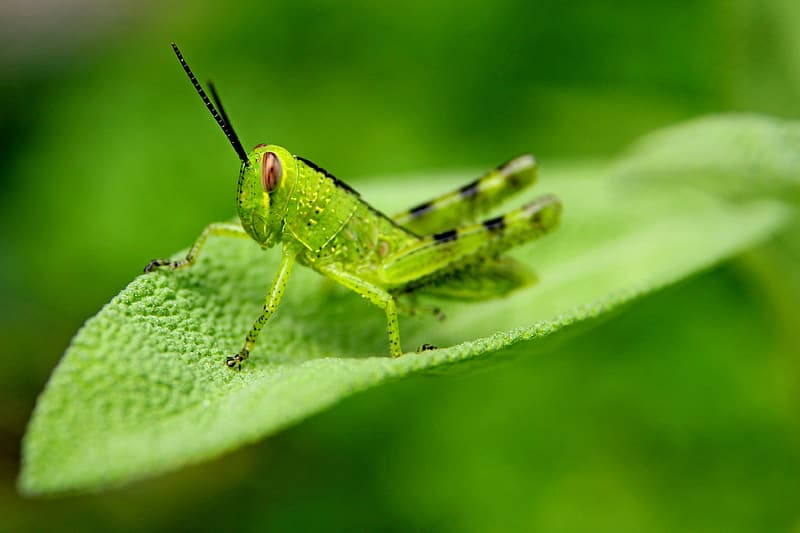 When Grasshoppers appear in your dreams they are considered a positive omen that implies new movement or advancement in your life. However they can be seen as a destructive force once they manifest as locust.

Due to their forward movement the grasshopper emerges in your dreams to remove obstacles, creates good luck and future advancement. Since they have been around the same time as the dinosaurs approximately 300 million years old; the grasshopper in your dream is an ancient symbol of leaps of faith.

Though the Bible tells us a different story of grasshoppers that often leads the dreamer thinking this is a bad omen. In the Bible however the prophetic meaning of grasshopper or locusts are considered a bad omen of plagues. The grasshopper will manifest in your dreams by noticing different colors, sizes, or if you are either killing or holding it in your hand.

The grasshopper is known for its quick and spastic movements that leaps forward to the next location. It’s inability to jump backwards implies that you are a person that is not going back to the past and will focus on what is next in the future.

Similar to the cricket, the grasshopper in your dream encourages you to aim high and go where others are afraid to take a chance, you will accomplish and achieve incredible heights and goals.

You have the ability to go anywhere at any given time with nothing holding you back, they not only have strong legs but can fly. A symbol to trust your intuition and to take a leap of faith as you will be guided by unseen forces.

The location of where you saw the grasshopper in your dream will indicate were the movement, change, or shift will happen. Alternatively they show up for you to notice what is unconscious to you, to pay attention to your surroundings and stop avoiding the inevitable. Change wants to come but you might be blocked.

In movies such as the Karate Kid or Kung Fu you will notice the wise sage or master saying “Choose wisely, grasshopper“, or “Patience young grasshopper“.  This context is still used today to correct or inform someone who might be rushing to fast.

Did you know that the grasshopper is equipped with five eyes. There is a large eye on either side of a grasshopper’s head, each equipped with thousands of lenses. This is often an overlooked symbol as when you move forward in life you will guided by your intuition and ESP abilities. Grasshoppers antennae is able to detect things way before it sees it suggesting you have good foresight.

Multiple eyes suggests you to always work for independence, freedom, and enlightenment along your life journey. When you are able to obtain these skills you will leave back the negative past and look forward to the future. You will unlock many hidden talents and achievements that where laying dormant for so long.

Noticing a giant grasshopper in your dream represents a bigger leap, success and achievements in your life.

A black grasshopper in your dream might connect you to the shadow, yin, mysterious as you advance forward in life. The color brown is a symbol of being grounded in the earths energy.

Killing Grasshopper In Dream Could it suggest you self sabotaged your own progress in life? Unless it was a threat its not really considered a positive omen.

Catching Grasshopper In Dreams To catch a grasshopper in your hands in your dream is a very powerful symbol related to advancement in life. Hands are often seen as symbols in our dreams that relate to our expressions and identity.